Here you can read some obituaries about passed away Blinstrubs from USA. Obituaries are collected from different internet sources.

Chester A. Blinstrub ID 388 (1928.02.15-2011.09.01), age 83, of Groton, N.H., formerly of Hanover, Mass., passed Sept. 1, 2011, of congestive heart failure. Chester was the son of Adolph (Jack) and Maria. He attended high school in Chicago and also attended Boston University. He worked for Jordan Hospital as a Biochemist. Chester was an Army veteran. Chester is survived by his wife Pauline; sons Ted, Tom and Paul; daughter Melanie and six grandchildren. He was the nephew of Stanley W. Blinstrub of Blinstrubs Nightclub in South Boston. Michael Paul Blinstrub ID1010 (1938.04.03-2010.8.20), 72, of Orange Park, formerly of Detroit, passed away Friday, Aug. 20th. He was a fun loving, big hearted man who enjoyed traveling with his wife and an avid golfer who looked forward to Friday nights at the club with his friends. He is survived and will be greatly missed by his wife of 48 years, Carol; daughter Teresa Virgadamo of Hudson, son Thomas of St. Johns; four grandchildren and 2 great grandchildren. Edmund J. Blinstrubas ID B408(1926.11.15-2016.06.22), age 89, of Prospect, passed away peacefully on Wednesday June 22, 2016 in the VITAS Unit at St. Mary’s Hospital, surrounded by his loving family. He was the husband of Joyce (Knapp) Blinstrubas.
Mr. Blinstrubas was born in Waterbury on November 15, 1926 a son of the late Joseph and Catherine (Chepulis) Blinstrubas. He was retired from Noranda Metal Works after working as a Quality Control Inspector for many years, also worked at Chase Brass and Copper and was a communicant of St. Anthony Roman Catholic Church in Prospect. He was a Girls Softball Coach and Little League Coach for many years, enjoyed golfing and fishing, loved animals and was a member of the St. Joseph Bowling League.
Mr. Blinstrubas proudly served his country as a member of the United States Army during World War II. He earned expert marksmen and served in the Pacific Theatre.
In addition to his wife, Mr. Blinstrubas is survived by two daughters: Sandra Schumann and her husband Chuck of Anchorage, Alaska and Alaine Caterino and her husband Mark of Prospect, a son: Peter Blinstrubas and his wife Katherine of Prospect, seven grandchildren: Matthew, Samuel, Thomas and James Blinstrubas, Alexander Schumann and Andria and Aliza Caterino and several nieces and nephews. He was predeceased by four brothers: Pete, Joe, Johnny and Walter Blinstrubas.
Burial with full military honors will be in Prospect Cemetery.

Nini Blinstrub Ballieux ID1046 (1917-2007.11.25), who struggled to protect Jewish children during World War II as a member of the Dutch underground, came to the U.S. on a Fulbright scholarship and practiced family therapy in Highland Park until she was 80.
Mrs. Blinstrub, 90, died of complications from pancreatic cancer Sunday, Nov. 25, in Evanston, said her husband, Walter.
Mrs. Blinstrub was born Leonie Ballieux and grew up in the Dutch city of Maastricht, where her father was a porcelain artist. As a young girl, she contracted a serious infection that led to the amputation of one leg. She lived the rest of her life with an artificial limb, although it hardly hindered her activities, said her sister, Pauline Ballieux of Maastricht. “She managed very well with that; she went around on my bicycle,” her sister said.
During the war, food was scarce, and families, including the Ballieuxes, resorted to grinding up tulip bulbs to make a sort of porridge. Mrs. Blinstrub was among many who did what they could to protect the country’s Jewish population, her sister said.
Mrs. Blinstrub helped transport Jews to safe houses, away from the Nazis. On a train to Rotterdam, she hatched a plan to get herself arrested by a German soldier who already had two young boys in custody, her sister said. It was difficult for the soldier to guard three people, and she managed to distract him so the boys could run. On another occasion, she hid three children in line at the police station beneath the folds of her cloak and walked them to safety, her husband said. “She wanted to do everything,” her sister said. While she rarely spoke of her wartime experiences, when asked, she would try to explain the motivation for risking her own safety, her husband said. “She said it was simply the injustice of it, the fact that these people were perfectly good people and were being treated like rats,” her husband said.
After the war, Mrs. Blinstrub studied speech therapy in Rotterdam and went into private practice. In 1952, a Fulbright scholarship brought her to Northwestern University, where she met her future husband, also a student.
Together, they continued their studies at the University of Chicago and went on to live in Hyde Park until their move to Highland Park in 1968.
She worked as a speech therapist with mentally disabled children through CARC (formerly the Chicago Association for Retarded Citizens). She became more convinced of the need to involve whole families in therapy and gradually shifted her practice in that direction, said Barbara Greenberg, a psychotherapist and longtime friend and colleague.
Mrs. Blinstrub completed a two-year training program in marital and family therapy at the Family Institute at Northwestern in the early 1970s and devoted her practice to working with individuals, couples and families.
“She saw that it wasn’t just speech, it was the whole system,” Greenberg said. “She was very empathetic and caring and a good diagnostician.”
The Blinstrubs’ home was filled with art, including porcelain from her father’s factory, and the couple were regulars at the Lyric Opera, said Minda Manolis, a friend.

Mary Ann (Blinstrub) O’Neill ID1009 (1928-2003.07.04), 74, the founder and original owner of La Becasse Restaurant on Glen Lake in Leelanau County, died on Friday, July 4, at her home in Birmingham after a two-year battle with cancer.
Born in Detroit in 1928, she graduated in 1946 from the Lawrence Avenue Academy of the Sacred Heart. In l950, she married John Patrick O’Neill, an attorney. They and their five children lived in Detroit until 1969, when they moved to Birmingham.
In the early 1970s, when her youngest child entered high school, Mrs. O’Neill returned to the University of Detroit and graduated in 1974 with a bachelor of arts degree. In 1976 she attended La Varenne, the acclaimed culinary institute in Paris, France.
Back home in Birmingham, Mrs. O’Neill started a successful, award-winning catering business. The following year, she furthered her culinary skills by attending extended cooking classes with Marcella Hazan in Bologna, Italy.
In 1978, she and her husband purchased a small family restaurant on Glen Lake in Leelanau County, near Traverse City. In a single year, she – after enlisting her husband and five children – transformed the restaurant into a French country-style restaurant, eventually winning the Detroit News’ first-ever “Best Restaurant In Michigan” award in 1984. She sold the restaurant in 1988.
In her retirement Mrs. O’Neill pursued her love of painting by taking classes at Cranbrook, the Birmingham Bloomfield Art Center, and in San Miguel de Allende, Mexico, where she and her husband spent their winters enjoying the culture of Mexico. In addition, Mary Ann O’Neill was an avid traveler, reader and lover of the arts. She will be remembered for her wonderful sense of humor, her kindness and her patience.
Mrs. O’Neill is survived by her husband, John; her five children, John (Linda), Michael, Mary, Ellen and Annie; five grandchildren, Erin, Colleen, Stephanie, Gerard and Kenya; and her brothers, Joseph Blinstrub, Michael Blinstrub and Margaret Pigott.
Interment will be in Greenwood Cemetery, Birmingham.
Charles (Chaz) Blinstrub ID832 (1987-2012.02.23) 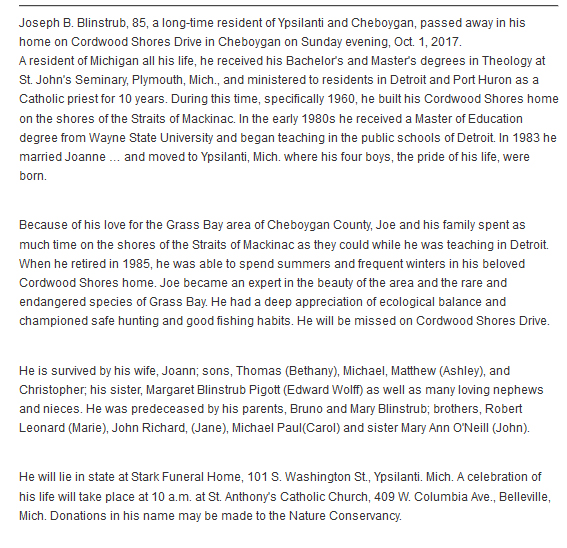