Blinstrubs is the noble family of the Grand Duchy of Lithuania with Danish roots, according to historical sources known in Lithuania since 1550s. The family retained it’s status of nobles during periods of The Polish–Lithuanian Commonwealth and the occupation of Russian Empire.

An extract from “Heraldry of nobility of Grand Duchy of Lithuania” from 1658, written by historian Albert Vijukas-Kojelavicius describes Blinstrubs as following: Blinstrubs derives from Towtwil, prospers in Duchy of Samogitia and province of Kaunas. Rich people. Possess blazon “Swan”.  It is correct – Samogitia (Žemaitija) or Viduklė county, if to be more precised, has been oldest known living place of Blinstrubs. In Batakiai eldership inventory of 1558, written by GDL revisor Andrew IlgauskasD459, which was found in the case of Pašaltuonis-Kulvertiškiai (later Rimšai) manor of Viduklė county, Blinstrubs are mentioned for the first time. It means that Blinstrubs already lived in Samogitia under period of the Grand Duchy of Lithuania and under ruling of king Sigismund II August. It means still under period Gediminas dinasty. This fact reject the theory that Blinstrubs came to Samogitia under swedish kings Vasas period. In the inventory Blinstrubs are mentioned as Noblemen of his his royal highness king (Bojar Korolia Jego krolewskej milosti). It’s oldest prove of family’s nobility which remained also under next centuries.

It is possible that the Blinstrubs lived in Viduklė county already in 1536, during the ruling of King Sigismund I. In Lithuanian Historical Archive there is a case of two nobles – Michael Airimowicz and Johannes Pacewicz on donating their lands, peasants and a manor to Viduklė church D466. In this case two brothers Simon (Szymko) and Gregor (Hrycius) Towtwilowicz are mentioned as witnesses. It’s big chance that they were progenitors of Blinstrub family in Lithuania. This theory also strengthens by the fact that some of the ancient Blinstrubs signed documents as Towtwilowicz (see George Blinstrub’s signature at the bottom of the page).

The second Blinstrubs patrimony was Pašaltuonis-Kulvertiškiai manor in Viduklė county, which is mentioned in Batakiai eldership inventory of 1558 D549. In about that time the first Blinstrubs patrimony Alsa (Viduklė-Paalsė) manor, currently Blinstrubiškiai in the same county, has appeared. In remained historical sources it is mentioned in 1569 for the first time. In Alsa manor, until 1734, lived sons and grandsons of family’s progenitors in Lithuania, Simon’s (ID842) sons Peter (ID841) and Caspar Blinstrubs Olsowski de Towtwil (ID843). In other, Pašaltuonis-Žvirblaukis-Dūdiškės (Dūdlaukis) and Raulai-Numgaliai-Kempaliai manors of Viduklė county, lived the progenitors of another Blinstrub family, brothers Stanislaus (W2) and Bartholomew (W3) Blinstrubs de Chrzczon as well as their children. That branch used blazon “Wręby”. More about this family you can read in section Blinstrubs de Chrzczon. 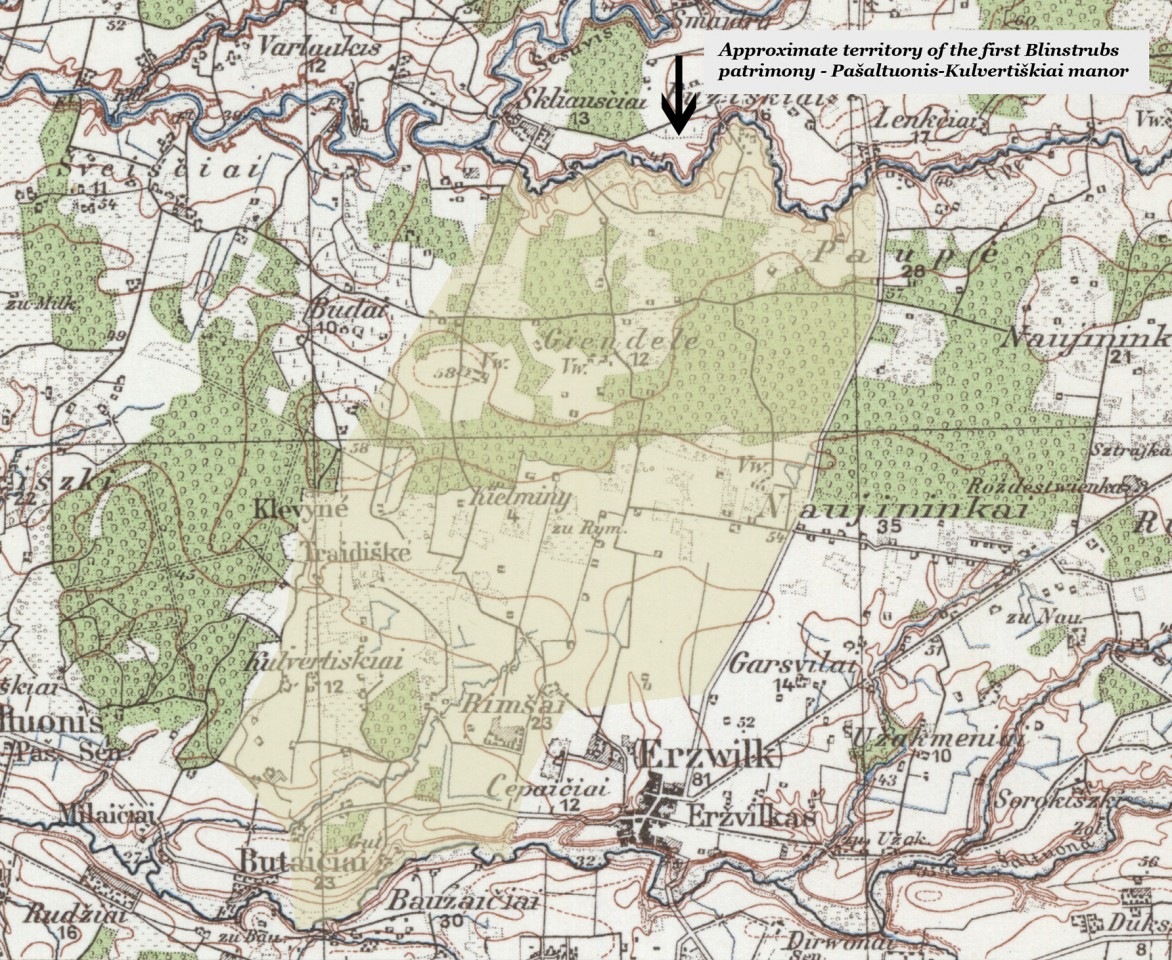 In 16th.-17th. centuries the territory of Raulai-Numgaliai-Kempaliai  and Sujainiai manor, with it’s center, the first Blinstrubs patrimony Alsa (Viduklė-Paalsė) manor, has been called Blinstruby.  An approximate territory of Blinstruby land can be seen in a map below. 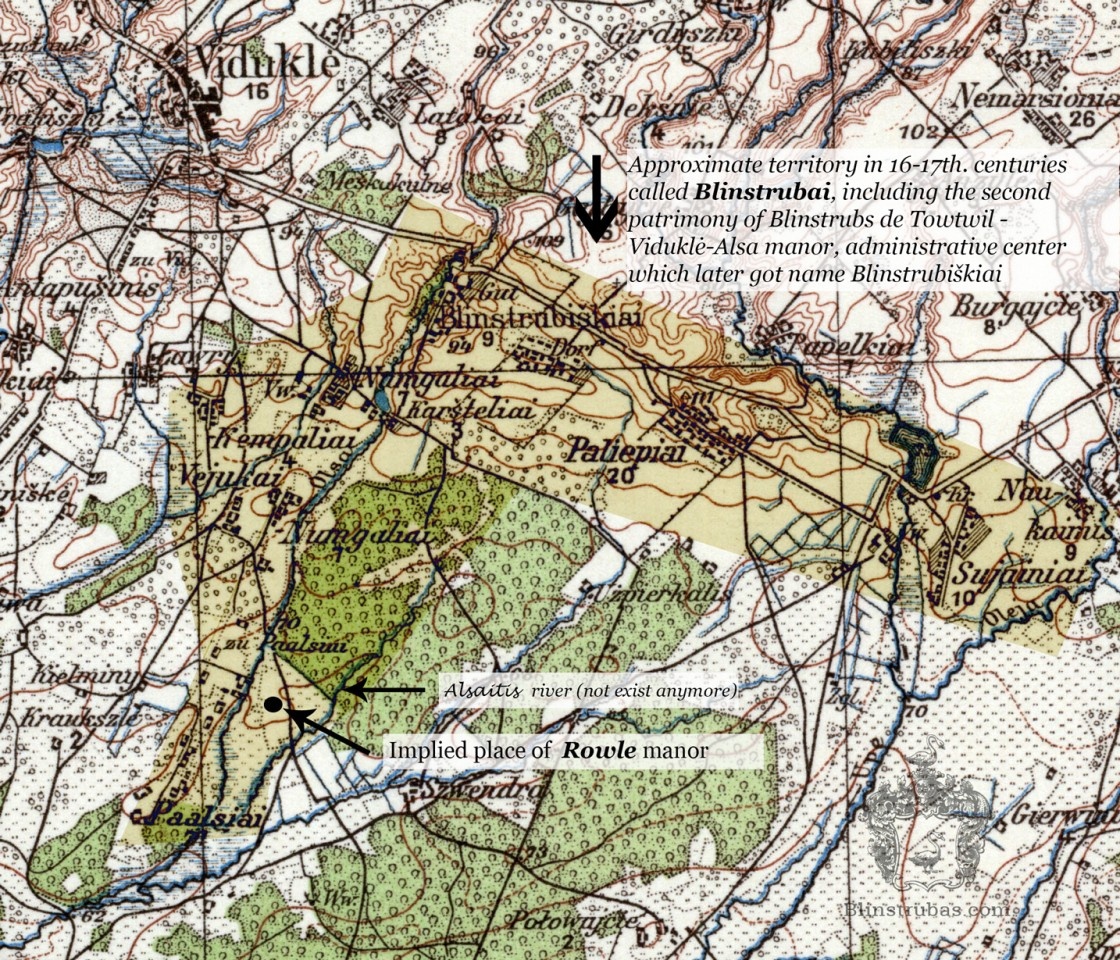 In 1886 began another Blinstrubs migration trend, which, over time, formed the second largest Blinstrub community – emigration to the United States.  The first Blinstrub immigrant to the US in 1886 became Johannes Blinstrub which later lived in Chicago, IL.

If rely on a legend, our family to Lithuania arrived from Denmark. For this could be true tells one small Danish town name – Blenstrup. In Denmark many towns or villages have such endings as -trup or -trop, and even some Danish have family names ending  -trup, so chances that Blinstrubs came from Denmark are really considerable. A progenitor of the family was probably a person who derived from some place in Danmark and used in his surname as name of his patrimony or village (see an example below). In Batakiai eldership inventory of 1558 mentioned family’s landowner is written as Blinstrup. This fact enhances the theory Blinstrub family’s origin is Danish with original ending -trup, which later transformed to -trub.

There is also a legend that Blinstrubs before moving to Lithuania, for a time lived in Poland. That there were Blinstrubs living in Poland, also confirms in 1934 released Braunsberg (now Braniewo) gymnasium student handbook, writen by the German professor Georg Luhr, which states that in 1715 in Braunsberg leadership and grammar studied the 23 year old student from Poland Bartholomew Blinstrub from Nakla city in Poland. Unfortunately no more historical sources, confirming Blinstrubs living in Poland in XVI-XVIII centuries, are found.

Until 19th. century Blinstrubs of blazon Swan presented themselves as Blinstrubs de Towtwil, so it is possible that family has family relations with noble family Towtwil. Does it mean relationship to Lithuanian king’s Mindaugas nephew, duke Towtwil or Grand Duke Vytautas’ brother duke Towtwil is unknow. This probably means that the Blinstrubs in XVI century got into relationship with Tautvilai family, which still existed in the middle of the 16th century, in the same Viduklė county.

After 1918, when Lithuania declared an independence from Russian empire, family name has transformed from Blinstrub to Blinstrubas. Some got their family names converted to Blinstrubis, Blistrubis, Bistrubis etc., but it is people of the same family.

Family status in state of Lithuania and society

In the 17th and 18th centuries, Blinstrubs belonged to the Lithuanian-polish royal elite. The son of Adam, George Blinstrub de Towtwil (ID857), has graduated from evangelical universities of Marburg and Frankfurt. Thanks to his education he became the secretary of the King of Poland and the Grand Duke of Lithuania Wladyslaw IV Vasa and after his death, George became nobleman of King Johannes Casimir Vasa. His brother Johannes (ID860, d. 1669) was the secretary to Kings of Poland and Grand Dukes of Lithuania – Wladyslaw IV Vasa and John Casimir Vasa and the royal secretary and rotmaster to their father, King of Poland and Sweden, Sigismund III Vasa. He was also the deputy of Samogitia tribunal in 1640 and 1655. Other Blinstrubs took ranks of rotmasters, judges, deputies, marshals of Kaunas county and Samogitia, as well as many honorary duties of nobility.

It can be assumed that the kings of the Swedish origin, Vasas, have chosen George and John as their secretaries, because of the Danish origin of Blinstrubs. In the seventeenth century Blinstrubs not only enjoyed the privileges of being members of the royal elite but also had good diplomatic skills. According to historian Adolfas Šapoka, George Blinstrub, during Swedish Deluge, was the only nobleman who had a document issued by the Swedish general, Magnus Gabriel de la Garde, which prohibited the Swedish army from plundering George’s manors and lands in Lithuania (A. Šapoka “Kėdainiai treaty” 1990). In addition, brothers George, Johannes, David and Samuel Moses Blinstrubs were signatories of the Kėdainiai Union and in 1644 January 2 ratified the privilege of King Vladislav IV Vasa to Samogitia and its nobility.

In 17th.-19th. centuries Blinstrubs were landlords, but already in the beginning nineteenth century many Blinstrubs became wealthy farmers and some began to move to the cities and towns.

In April 10th of 1798, the family reconfirmed its status of nobility in the Vilnius Governorate’s noblemen’s deputies’ council (LVIA F391, ap6, b7) 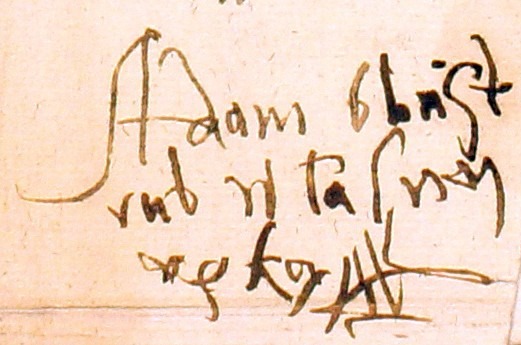