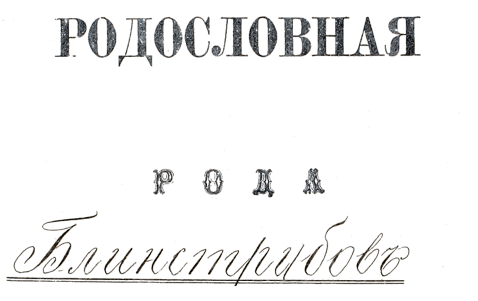 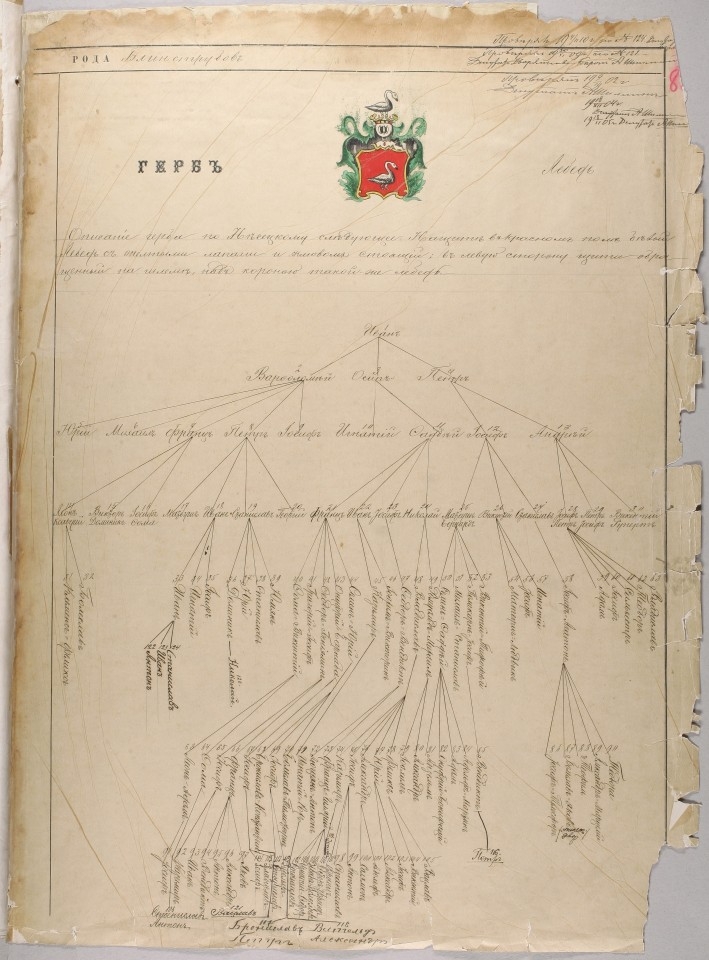 Nobility status of noblemen descends to descendants via male line, so it was important to prove connection of new born descendants to their noble ancestors. For that reason noble families created and updated family trees and schemes. Unfortunately, no genealogical trees of Blinstrubs family from the GDL and ATR periods have survived. First survived family trees can be found under occupation period of Russian Empire, in cases of legitimization of the nobility status of Vilnius noblemen deputy assembly. The largest and most comprehensive scheme of Blinstrubs blazon “Swan”, was created in 1886.08.04 in the office of Vilnius noblemen deputy assembly and updated couple times later. It begins with Johannes Blinstrub (ID2) who was born in the end of 17th. century and ends in 1894. The original of this family tree keeps in Lithuanian State Historical Archive. There are no daughters listed in the scheme, many male descendants are missing and it contains some major mistakes as well. In this family tree 124 Blinstrubs are listed. 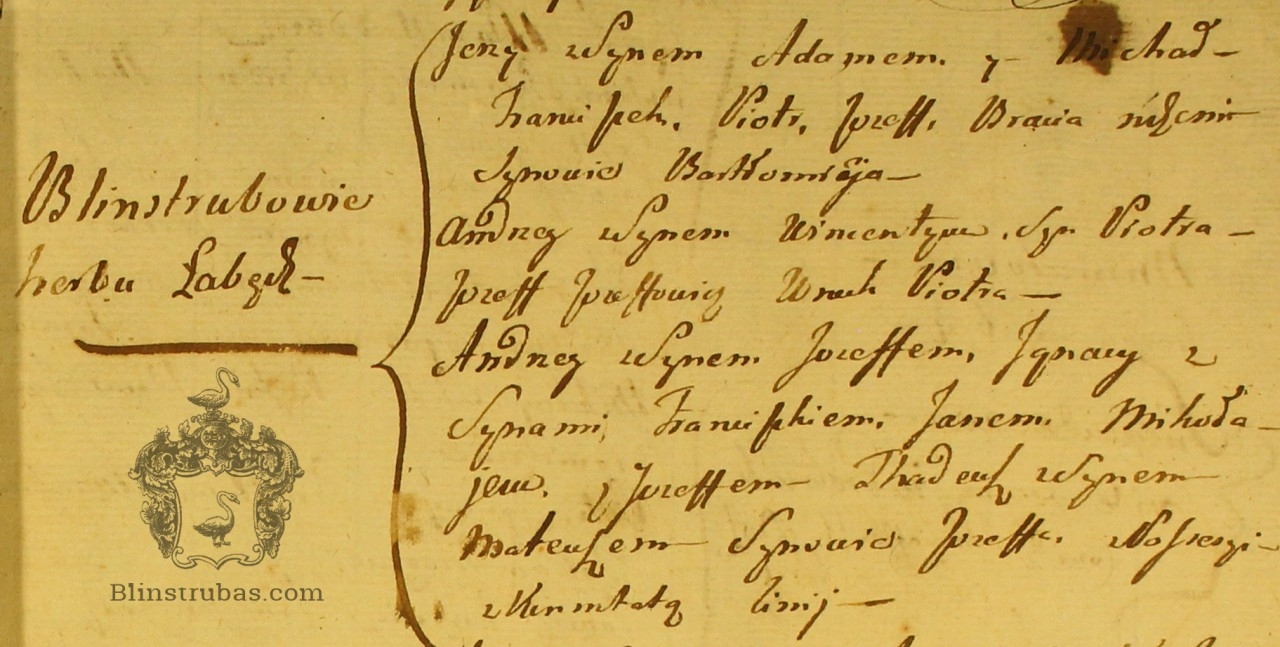 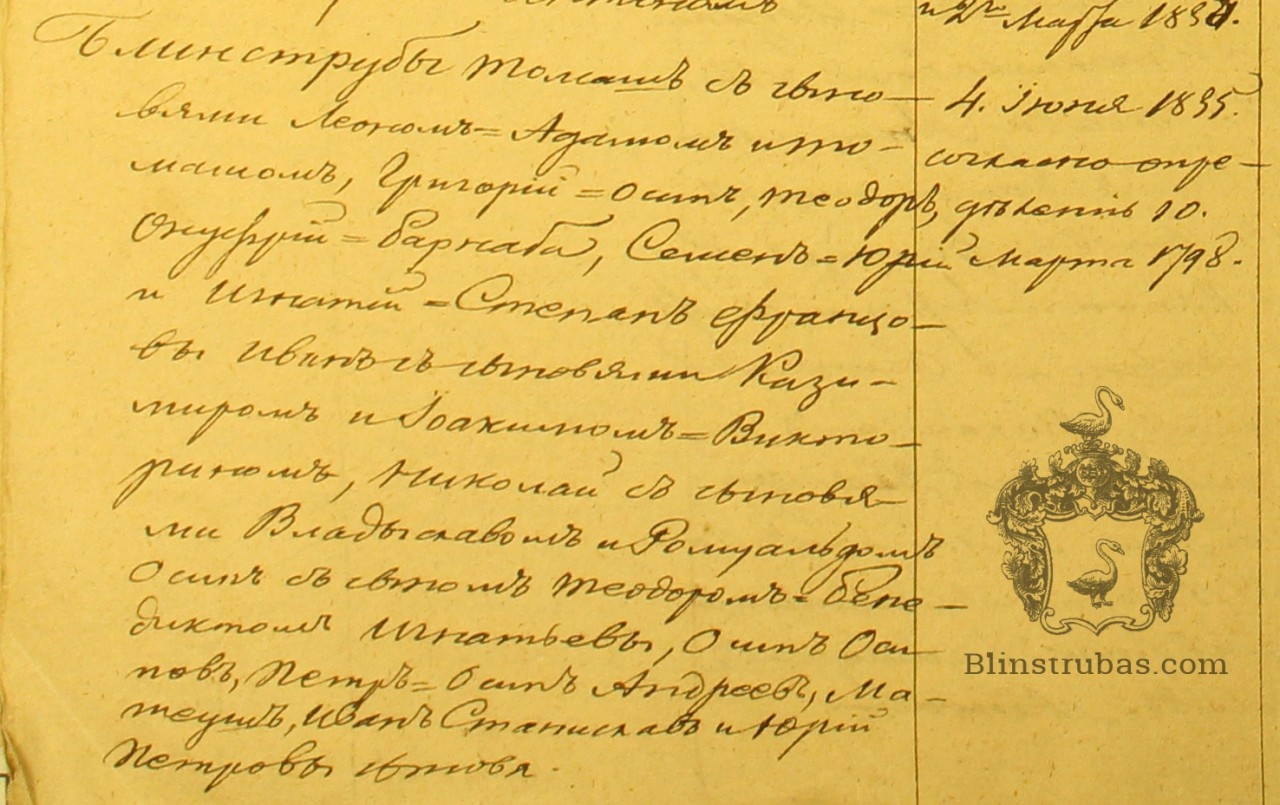 Based on the family tree scheme of Russian empire period and various historical sources, it was possible to create a complete genealogical tree of Blinstrubs de Towtwil blazon Swan, which begins with progenitors of Blinstrubs family in Lithuania,  owners of Alsa (Viduklė-Paalsė) manor in Viduklė county, Simon’s sons Peter and Caspar Blinstrubs Alsiszki de Towtwil and ends with Blinstrubs born in this century. In addition, several historically proven updates were made by own initiative of five members of Blinstrubs family – Stanislovas Algimantas Blinstrubas from Šiauliai, Viktoras Blinstrubas from Vilnius, Josef Blinstrub from Germany, Vaida Blistrubytė from Varniai and Juozas Kazimieras Blistrabas from Kuršėnai. In case you have a documented branch of your Blinstrub family, which have connection to this tree, you are welcome to contact us. Digitized and updated version of this family tree you can find below.

The page needs sometimes to be reloaded, in order to see the picture of Main family tree. Family tree is also available for download as PDF file. Last update 2022.11.18. 1025 persons.

In 1794-1795 many Blinstrubs rushed to legitimize themselves and their descendants according to the law of Russian empire. Unfortunately, not everyone had sufficient surviving evidence to prove own nobility. In 1833 further requirements were implemented, which made impossible to some branches to legitimize themselves and their children. One Blinstrub branch got denied legitimization because of lack of evidence of nobility. A pair of Blinstrub branches that did not have sufficient proof of origin, got managed to legitimize prior 1833. were included in the family tree but got connected to the wrong ancestors. In this way, two branches of the Blinstrub family were illegally included in the Main family tree and one branch was disapproved. This became clear only after detailed historical-genealogical research conducted in 2020-2021.

The first branch, illegally included in the scheme of the Main Blinstrub Tree, was the Blinstrub branch of Joseph and Apollonia Pacevičiūtė, which was connected to the Blinstrub branch of the Raseiniai Gabšiai manor. As it turned out later, Joseph’s parents were completely different – Joseph, Bartholomeus son and Agatha Rimkevičiūtė Blinstrubs from Šaukėnai parish, so this branch was removed from the Main Tree and separated into a separate family tree scheme, which can be seen below or downloaded as PDF file. Last updated on 2022.11.18.

The second branch illegally included in the scheme of the Main Blinstrub Tree, was the Blinstrub branch of Francis, the son of Ignatius and Magdalena Petkevičiūtė Blinstrubs. This branch, in the Main Family Tree, was connected to ID10 Francis Blinstrub, son of Bartholomeus, although, as it turned out later, Francis was the son of unidentified Ignatius, so this branch was removed from  the Main Tree and separated into a separate family tree scheme, which can be seen below or downloaded as PDF file. Last updated 2022.1.18. Both, the first and second branches lived in the Ariogala region, so it is likely that they once had a common ancestor.

There is one more branch which is not added to the Main family tree – Stanislaus Blinstrub from Varniai. His descendants got not luck to legitimize it’s branch because of lack of survived documents, but it’s highly possible that this branch belongs to Blinstrubs de Towtwil. Their family tree can be seen below or downloaded as PDF file. Last update 2022.11.18 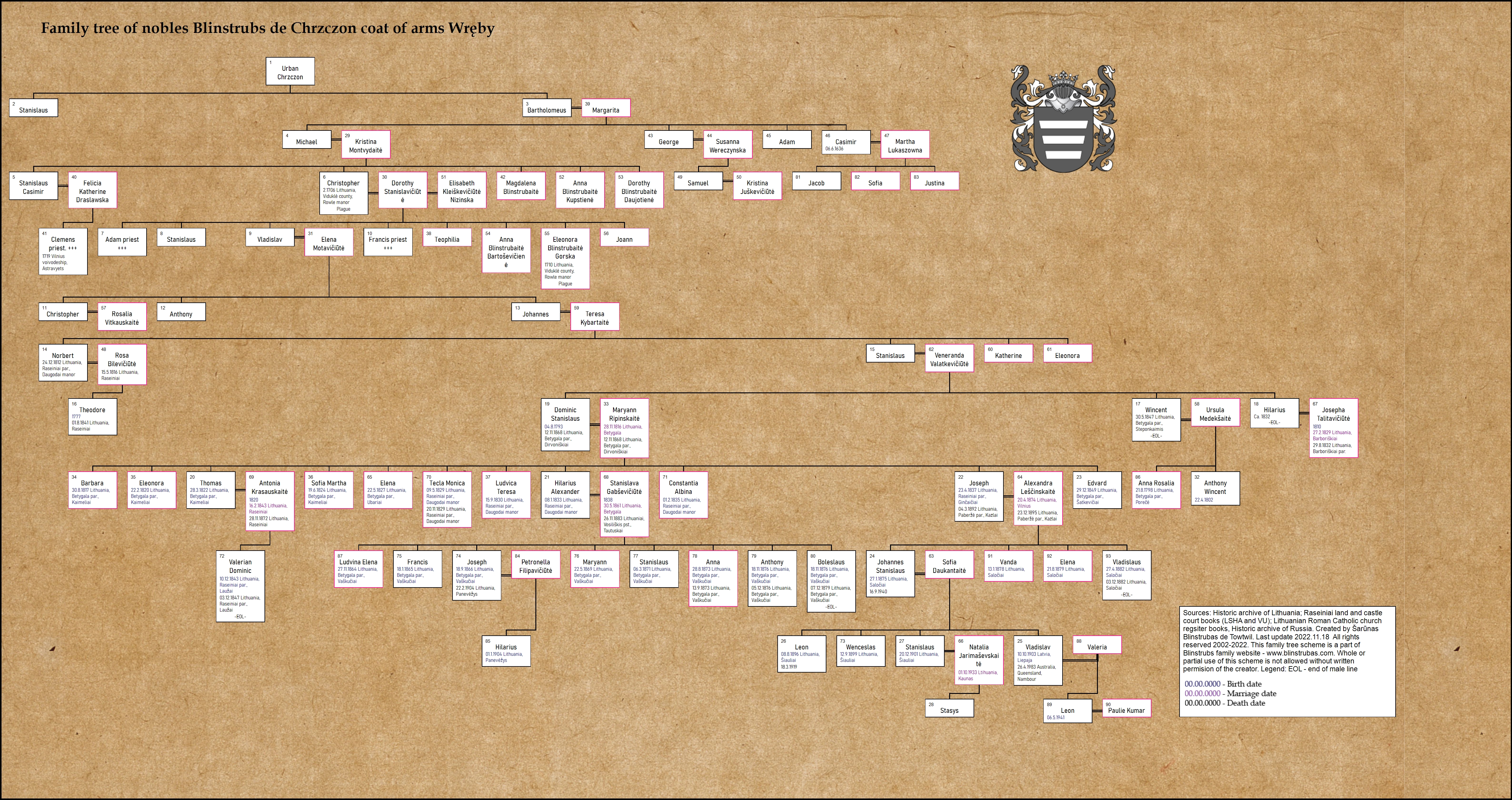