In Denmark, in the region of Nord Jylland, near the city of Aalborg, there is the old village of Blenstrup. Its name is very similar to the Blinstrub family name. In the 14th century the same village was called Blynstorp, which is even more similar to Blinstrub. Is there a link between the Blenstrup village and the Blinstrub family, based on historical sources, is not known, but possible connection, knowing that Blinstrub sounds neither lithuanian or slavish, exist.

In any case, it’s interesting to know what kind of village Blenstrup is. Local Danish historian Klaus Gjerding (1851.10.16-1880.08.06) during his short lifetime was able to publish in 1875 one historical monograph in the Danish language about Gjerding, Blenstrup, Skjorping, Fraer and Brondum parishes, in the Hellum district. It is called Bidrag Til Hellum Herreds Beskrivelse Og Historie (Contribution to history of the Hellum district). Let’s take a few sentences from this chapter on “Blenstrup” for your attention.

“This village in 1390 (was) written as Blynstorp. Later, the name of the village has been written in documents with “i” – Blindstrup or Blingstrup. The origin of the name is unclear. One of the estates in 1348 belonged to a nobleman named Mogens Jonssen, who handed it to Suend called Kou. This is probably the same estate that the 1451 Henrik Stigsen donated to the Mariager (St. Birgitte) Monastery, and later in 1465 Morten Svan (from Ejstrup) donated it to Klosteret (leader of the monastery). Henrik Stigsen was the son of Stig Andersen af ​​Thordrup and lived in Kielstrup, Ove Parish. The village and the manor belonged to the monastery until the Reformation, and then it belonged the Crown until 1647, when it was sold to Mrs. Margrete Marsvin from the village. In the manor lived Mr. Jens Morch, when he was the Blenstrup Chaplain. Other nearby 4 manors and 1 estate prior to the Reformation belonged to the Church. The 4 estates were connected to the village in 1561, the rest in 157.2 After Jorgen Seefeld death in 1662 whole Blenstrup village became property of Doctor of Law at the University of Copenhagen Cosmus Borneman. “ 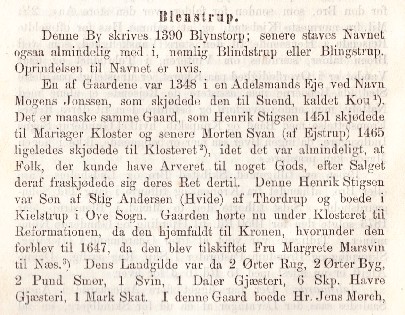 From this monograph it can be seen that Blenstrup until the 17th century was a small village with church and several estates. The original village name is Blynstorp, later converted to Blenstrup. Blynstorp is a compound word consisting of “Blyn” and “Torp”. Torp is an ancient Scandinavian word. Ordbog over det danske Sprog (Old Danish Dictionary) describes Torp as a small manor or farmstead. Historically, this word was used in the names of small villages, consisting of several estates or farmsteads. The meaning of Blen’s word is not clear. One version of the village’s name, Blindstrup prompt that it may be related to blindness, so the name could mean “Blind manor” or “Blind village”. The word “Blind” also means “fake”, so meaning of Blenstrup name may have even other versions.